#LuxuryBreak: Discover Authentic France Away from the Crowds

Whilst many might already be familiar with the beautiful coastline of southern France, few will have heard of the Tarn region in Occitanie. Unsurprisingly, over 74% of visitors to the region hail from France itself. The Tarn indeed remains an authentic affair away from the crowds, making it the perfect destination for those looking for a quintessentially French holiday.

There’s much to see and do in this hidden gem. Located just to the east of Toulouse, the region boasts diverse and varied landscapes such as the vineyards of Gaillac, the stunning UNESCO-listed sights of the town of Albi, and the medieval forests of the Sidobre. It doesn’t offer direct access to the coast, but the beautiful rivers and lakes make up for it.

The region is delightful throwback in time, reminiscent of 1950s films with an Italian flair: its countryside is full of medieval hilltop villages and rolling hills covered in sunflowers – it’s therefore no surprise that the region is often nicknamed ‘the Tuscany of France’.

Holidaying in the Tarn is a chance to embrace the tranquil and peaceful lifestyle of the locals. The Tarnais know how to enjoy the simple things in life, and have given this way of living its own name ‘lézarder’, a local term which refers to the act of simply relaxing and enjoying the moment.

And it’s easy to lézarder and get lost in the streets of Albi, the Tarn’s largest town. The intricate medieval streets take you back in time, and the locals’ love for their town shows in the many quotes proudly displayed on shop windows.

They are the words of Henri de Toulouse Lautrec, a famous painter who was native to the area, and whose life work is showcased at the Toulouse Lautrec Museum. The museum itself is located in Berbie Palace, a former Bishop palace, now part of an episcopal city at the heart of the historic town. The whole episcopal city, which also encompasses the stunning Sainte Cecile cathedral, was listed World Heritage site in 2010.

Albi’s warm and peaceful lifestyle shines best at the traditional market held each morning. The covered market is located in a turn of the century building, and it is there that the locals meet with friends, shop for their weekly groceries, and simply discuss current events. The atmosphere is quintessentially French, and it’s common to see men, women, or children carrying a baguette under one arm and a newspaper under the other in a wonderful rendition of the renown French cliché. This authentic setting is ideal to discover odd and rare flavours such as the local Lacaune charcuterie and the mysterious responchons, which are oddly shaped asparagus.

Foodies are indeed spoiled for choice in the region: Fois Gras, like most of southwestern France, forms an integral part of the local gastronomy, but the Tarn is also home to the Cassoulet and to rarer produce like the Pink Garlic of Lautrec and the Saffron.

Restaurants across the region serve traditional, fresh dishes which celebrate the Tarnais’ love for all things epicurean. The north of the region is also home to some of the oldest vineyards in France, some of which date back to roman times, resulting in a wide range of local vintages and varieties, such as Gaillac Rosé, or Gaillac Primeur.

Out into the countryside, the Tarn’s scenic roads offer stunning views over the mills, vineyards, and farms, creating lovely landscapes that have changed very little in centuries. In the northern part of the region are the bastides, which are impressive medieval villages built in the 13th century. Their narrow streets are full of hidden treasures, such as gargoyles, wells, and artisan workshops. 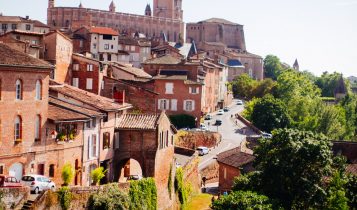 One such village is Cordes sur Ciel, whose name literally translates to Rope on the Sky. It takes one look at the village to see why: perched at the very top of a large hill, the village looks as though suspended in the sky. Climbing to Cordes is no easy task -the slope is rather steep, and no car is allowed in the village- but the views at the top are rewarding. And a visit to the stunning Jardins des Paradis, which are gardens at the very top of the village, offers a chance to discover a unique haven of peace in the cloud, away from the stress of everyday life.