The Top 10 Most Common Reasons Employees Have Been Fired Figures from ONS as per the report ‘Labour Force Survey’ shows that the number of unemployed people increased between August to October 2017 and November 2017 to January 2018. Whether the reason for unemployment was being dismissed from a job or leaving willingly, this perhaps shows that many brits are unsure of their suitability for the jobs they are applying for to begin with.

As a result, company formation experts, Turnerlittle.com decided to expose the most common reasons Brits have been fired so far in 2018.

The data was gathered by conducting a survey asking 1,446 ‘fired’ British employees, from the last six months working across several industries, the reasons why they got the sack. 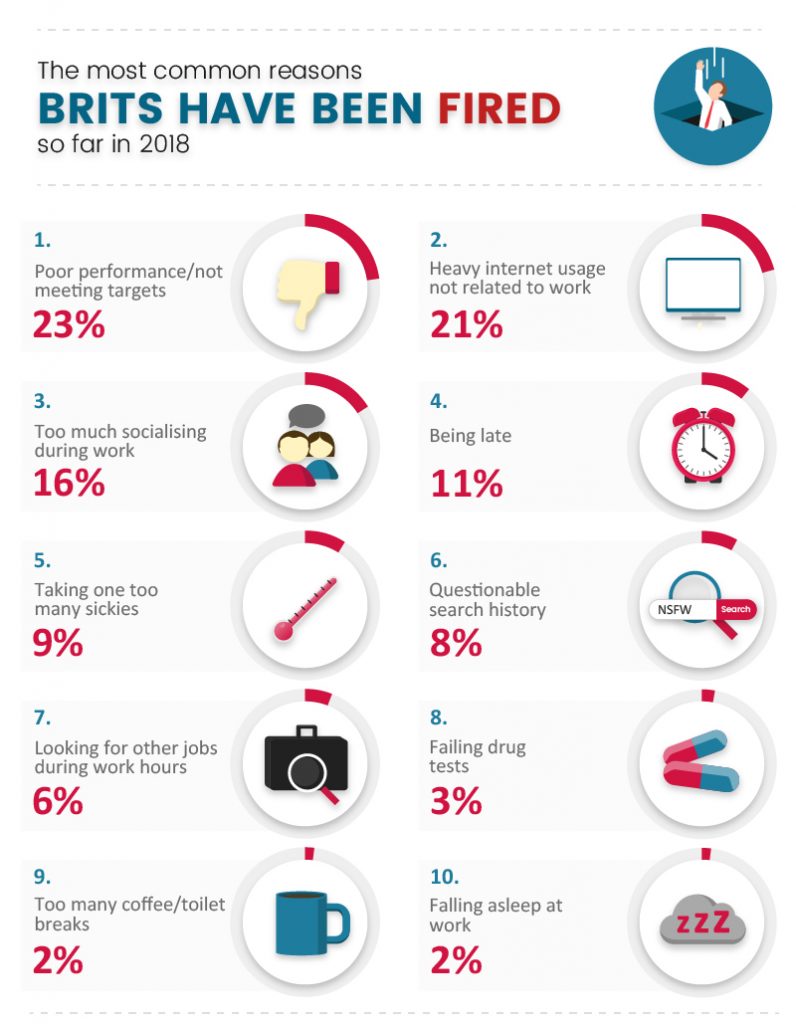 In response to the survey conducted, Turner Little asked respondents to share their personal stories of being fired from their jobs.

‘I just started working for this small company, we were about 15 employees. At the same time, I just started a water detox diet which meant I was drinking tons of water. Because of my new diet I would find myself going to the toilet almost every hour, if not twice an hour. I didn’t think it was a big deal until I received an email saying I was being let go. On the bright side, the diet helped me lose 8 pounds!’

‘I worked for an advertising company for about a year and a half. I was very happy with the job; however, the bosses were a bit uptight. My boyfriend was recently unemployed and looking for a job in marketing. As a loving girlfriend I decided to help him look for one. Stupidly, I decided it would be a great idea to look for jobs on my lunch break, from my work computer, thinking it was okay as it was my own time. A week later, I was called into the office and told I was fired, as my behaviour was “unacceptable”. Now my boyfriend has a job and is helping me find one. How the tables have turned.’

‘I was going through some personal issues at home, and let’s just say, I wasn’t getting the ‘beauty sleep’ I needed, which was starting to take a toll on my work performance. My bosses were surprisingly understanding until one day when I completely messed up. We had a meeting with a very important client, who also happened to have the softest, most soothing voice I’d ever heard. Long story short, that was the best nap I’d had in a while. Needless to say, it was my last day working for him.’